The fruit of knowledge

There are windows in our lives that open momentarily and shut forever. They reveal where we have come from and point to where we will eventually go. Like angels balanced on the points of pins, we are given a gift of knowing and then it is taken away from us. We are young and in our minds there is a maelstrom of memories which jostle, incapable of articulation because the tongue cannot yet act as the brainâ€™s tool. We have just learned the glimmerings of what it is to be an â€˜Iâ€™ and the enormity of separateness. Only if some empathetic adult intuits that the window has opened and teases out our pictures, will the revelations pour out before it shuts again.

I was sitting with a tiny girl not yet three years old, at a gathering for a meal. The hubbub acted like an insulation. I asked her about her first memories. No, before that. Before the pram. Before the milk from your motherâ€™s breast. Where did you come from? She sighed and looked at me as though I should know the answer but told me, nevertheless.

â€œI was an apple in an apple tree. The tree stretched up into the night full of stars. One day I fell slowly though the branches. I landed on grass. A man with a beard came with a knife. He wrapped me and gave me to my mother.â€

The room had gone silent. The magical little vignette hypnotized the guests. Then the little girlâ€™s mother whispered that when she had been born they had used old green towels and the doctor was a bearded man. But, like the rest in the room, she had no explanation for the apple tree and the stars and the velvet night.

Sanity not vanity in the author

Ok, think about a bordello. Think about one of its rooms. Think about what happens inside it in microscopic detail. There is a sperm with its single imperative. Whereâ€™s the egg? Oh there it is. Isnâ€™t it huge? Like a sun about to supernova. It must beat its tail harder. Itâ€™s a marathon and a sprint and millions of others are in a line. Just one final effort and a scream of abracadabra and the portal will open and it will enter and achieve singularity and meltdown.

The bordello is the world of publishing. The egg is the publishing house. The sperm is the writer. The medium in which they all exist is the literary landscape.

What, on this landscape, apart from competition with other sperm, complicates and exaggerates the quest to penetrate the egg? Well, there is a lack of signposting. Gone is the well-trodden relay of readers and editors giving thought to every well turned phrase, sifting out the most fertile tail that wags its owner. Instead there is a new kind of eugenics. The traditional primitive, lusty, organic coupling has given way to a laboratory wherein the sperm are spun through the centrifuge of a literary agentâ€™s subjective criteria to separate strong from weak. The DNA is configured so that the egg will allow it to break through its semi- impermeable shell. The ovum prefers this outsourced, artificial determinism and waits in a kind of languor for the fission of new fiction.

The other way to achieve conception is to swim in different waters in another room. It is a laboratory in which there is no eugenic differentiation. Eggs are as abundant as sperm. Every sperm can find fusion. Here e-publishers make the latter-day supernovae look like mere candles in the cosmos. This is the black hole of e-publishing. No-one ascertains the viguor of the wagging tail or the profile of the DNA inside it. It is a compressed Darwinism. Millions of couplings. Millions of births, all but a very few strong enough to survive for more than days or weeks. Yet every snuffed out spark of life has still contributed to the egg increasing in size and being greedy for more fertilisation.

There is a third way.

Create your own laboratory with your own eggs and sperm derived from your own stem cells. Couple them. Nurture your self-propagated offspring and let them live in this world you have conceived. Let them be promiscuous with strangers. Allow them in turn to be intimate with your creations and, as before, enjoy an earthy, lustful unpredictable intimacy. Then, as they leave the bordello, they can place on the bedside table a payment for what the experience was worth.

A Room With Two Views

Iâ€™m in Soho, London. The sun is bright but does nothing to mask the purgatory of the cityâ€™s coagulated humanity. I know that I must be seeing it like a Martian because I have been a mountain man for months. I have overwintered beside a wood burning stove as the snow piled ever higher on Mount Canigou above my house.Â  Iâ€™ve shut the shutters each evening as the early dark approached, hiding within the four walls in semi-hibernation. The physicality of tending to flame has given way to the passivity ofÂ  a hotelâ€™s central heating, the shutters to double glazing, the vistas of successive ridges in their lines of ever-darkening blue to rearing concrete and brick cliffs pressing against my chest, blocking sight lines, cramping my breath. People sacrifice their bodies to be here. They relegate their needs. They promote their wants. Rats fight to the death when their living space edges towards point zero. It feels like that here. The oppressiveness is only driven back into the shadows by tantalising artificial rainbows with their lure of crocks of gold and better times ahead.

I sit on my bed and look out of the window but, as in the short tale on this website, I donâ€™t see the street and the tops of determined human voyagers but a corner shop at the end of a village green, at a t-junction. I see through timeâ€™s window, scales fallen from my eyes. There are no cars on the road. I swing round and round a lamppost and fall, breaking my arm, and sprawl on to the stone-chip tarmac, perfectly safe, crying for my mother. I stumble into a bush of deadly nightshade and spend the night, imagining I am going to die. I plodge in the stream knowing there is a troll under the bridge. I see ghosts dancing on my moonlit bedroom walls. I hack at a y-shaped branch, perfect for a catapult and gouge a hunk of flesh from my thumb.

But, counteracting all such traumas and fearful visions, I walk on my own to Cissie Joyceâ€™s shop with a ration coupon in my hand. I buy a bulls-eye, so big my cheeks ache accommodating the rough, sugar coated ball, tongue just free enough to lick its sweet surface, smoothing it and by doing so changing its colour and reducing its size. I go to the farm shop to buy home made dandelion and burdock and to the house that, in autumn, sells bags of robin pears. At five years old I am free to do as I wish, go where I please, and like my hero William, be an incorrigible boy far away from his parentsâ€™ gaze.

The scene fades and now, below my London bed, I see uniformed children returning from school, hands firmly grasped in those of anxious adults, unseeing, deaf, marching parallel to the growling traffic and the horns, through the obstacle course of swinging briefcases, protruding umbrellas, puncturing stiletto heels and home to the sanctuary of bespoke bedrooms, televisions and games consoles. Far away from their parentsâ€™ gaze.

This little site of mine …long may it shine

I sometimes believe in reincarnation. I look at a tree and think, “That’s a bit like me,” that mountain ash. Or, imagining my future self as a hawk. Or experiencing the conundrum of seeing myself suddenly as another human being; precipitated by a child’s eyes or bearing. A life lived can often result in these momentary refractions of wonder about what might come next when all is over. New lamps for old is a theme I often write about. And so to this website. It is another stage. Another me. Another incarnation.

It proposes an unusual thesis; take the act of consumerism and turn it on its head. Let the reader enjoy (or otherwise) the product and then decide what he or she is going to pay for it, if anything. Â Thus, its brief is to remove all the marketplace trappings between the reader and the writer. No need to wander around a bookshop or a library armed with the latest reviews. No need to choose by dustjacket and blurb or a sly riffle through pages to try to gauge style. No jumping on the bandwagons of Waterstone’s or Amazon’s Â hit lists. No, the responsibility Â is merely to exist in that narrowed gap between conjured text and scanning eye.

Writing is done in the isolation of mind over matter. When it is finished the result is inverted and becomes matter over mind in that a story now takes up a space in the world and occupies the thoughts of its readership. Every tale takes days, weeks or years to make. What results takes a fraction of that time to absorb. There has always been this barter, the alchemical trade between storyteller and audience, since those days of being illuminated by a fire in a cave to today’s backlighting of an e-reader or the collection of bound leaves in the hand. At the beginning, as the raconteur finished a tale, there would be an immediate reaction of approbation or otherwise. Today, on this new website, response is not physical but virtual. A few words from the reader to the storyteller to say he or she has entered and left the author’s world. 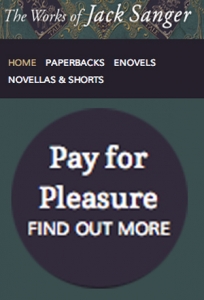