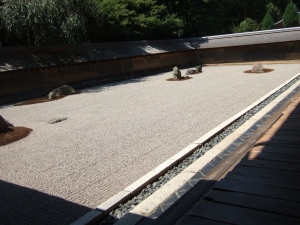 Outside Kyoto, up in the hills, there is a Zen garden some 500 years old called Riyoanji. I saw it at a fairly early hour – that is, before the tourist buses arrived. The setting is peaceful, in the middle of hectares of lake and trees. I viewed the rectangular artifact from a shady wooden pagoda, sitting on well worn planks. There was no place from which my eye could take in its entirety, despite it being only about the size of a tennis court.

The garden is, as one might imagine, a paradox. It represents nature’s garden by displaying no natural growth, save moss that adheres to the shadows of rocks placed on its shale. The shale is raked long-ways and is pale grey. The rocks are of varying sizes and they seem to have no obvious pattern in their distribution. I struggled to recover the original conception that coalesced in the mind of the monk who laid them this way. In other words, for me it became a physical version of a Zen koan, a metaphor for the impenetrability of existence. The experience forced me to sit and meditate – not in the usual sense of the act, as part of some spiritual quest – but in an unforced, serendipitous way that crept up on me.

Now, back in the UK, I think of having experienced all those art installations in their gallery-laid post-modernity, premised on the desire to make me think. None has held a candle to this gently disturbing encounter near Kyoto.

Tags: Being and nothingness...