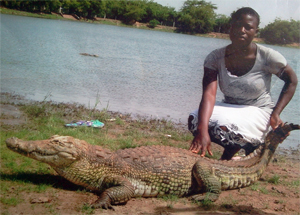 New Gods for old
Further conversation with a young Ghanaian male about his unshakeable belief in Christianity provides insights into cultural dissonance. That is, between him and me and between him and his traditions. There is little doubt in my mind that one of the reasons why Africans take to Christianity with a fundamentalist zeal is that its rituals are sacrificial and mysterious. His blood. His flesh. There is also the Old Testament with its patriarchal, forbidding and vengeful God. Since the white man brought ‘the book’, the new religion had the effect of breaking down social infrastructures within tribes. Where once women ran commerce and saw to the delicate business of maintaining the balance between labour and survival, the imperialist empire builders, brandishing their words from God, would only deal with males. Rupture followed. We see the consequences today, everywhere. And now the men have guns and women and children become ever more vulnerable.
Fortunately, for the time being, Ghana is peaceful and there are strong remnants of the old world co-existing with the new. Women choose tribal chiefs. Land is still passed down the female line. But the traditions are being eroded by land registry and other western business practices which tend to discriminate against women.
Back to my young Ghanaian friend, the one who laughs hysterically at the notion that I might not believe in ANY god! In northern Ghana, he tells me, The crocodile Chief in the river has a ‘red cap’. He will not kill humans. You can sit on him. He is a kind of godly manifestation in the water. But kill any of his tribe and humans will die as a consequence. He tells me another story. The tribal custom is to bury the umbilical cord of every human birth in a particular spot. The Chief travelled to the US and married a white woman whom he brought back. She set about, in a western health and safety kind of way, clearing up this site of decomposition. Once cleared the Chief’s body underwent encroaching paralysis; hands, arms, legs…. A further myth or traditional reality is that before you die you must be ‘instructed’. If this happens then you can communicate with the living and vice versa.
He tells me these stories with a curious reticence which gives way to enthusiasm as I don’t deride them like the Christian priests do. Pagan black magic. It reminds me of the extraordinary nature of churches all over the UK. The believers stand, sit, kneel and pay their respects to the One God and all around them are symbols of pre-Christianity. The Green Man. Fornication. Images of Lilith who preceded Eve. Bestiality. Christianity was the progenitor of imperialist (and capitalist) subjugation of the old traditions. And it is still doing it consummately well, here in Ghana.
www.chronometerpublications.me