The Art of Writing No. 26
Many people reading this will be from the new medium of e-book writing. Given the extraordinary sales of e-readers over the last couple of years, it is obvious that this medium is going to be the main outlet for creative writing in the future. The previous blogs seem to me to be equally appropriate for physical and virtual books but there are notable differences that are worth a note or two.
Producing your book for Kindle, IPad or Sony (apart from a reliance on teckie knowhow, yours or an agency’s, to translate your book into an acceptable format) gives you a great deal of power over your finished product. It is you who decides how pages look, what font, what glyphs (symbols that act as dividers within chapters) and what cover. In other words you become a designer-writer. Some of you will baulk at the very notion, preferring to stick to what you think you know best but others may find this previously barricaded world, worth breaching. I read a friend’s new book this year and the cover looked as though it had been designed by an android. It had nothing to recommend it. Remember that a great percentage of buyers in bookshops buy books after being attracted by their covers. Now, when you buy e-books, you also have a facsimile cover to help persuade you.
My three recent books (five if you split Azimuth into its three volumes) gave me a great deal of pleasure in the formative stages of designing their covers. In two cases I gave the book to a designer to read and also outlined a rough brief. She (Hollie Etheridge www.holsterdesign.com) offered a variety of interpretations for me to look at. I chose what was nearest to my projected vision and suggested amendments and then, through this iterative process, all was accomplished, a JPeg was sen to me and I uploaded it in the relevant area of the site.
The front cover has to grab. Since Azimuth is a multi-layered, historical fable, the cover had to represent mystery, Tale-telling and adventure set in a Persian empire. Hollie produced the following: 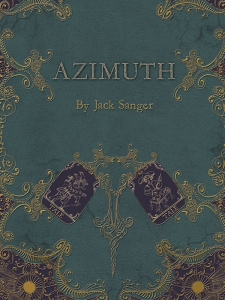 In The Strange Attractor, a crime novel with echoes of Raymond Chandler, the aim was to have that nourish, amoral feel to it, harking back to the forties and fifties: 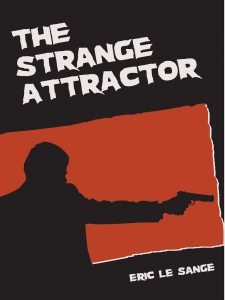 With Through a Mirror Clear: a Gothic Romance, I worked with my wife who is excellent at PhotoShop. This probably allowed even more hands-on decision making. The aim was to represent a novella which tells a tale about rupture in family life and which explores the capacity of the mind to deceive and inveigle: 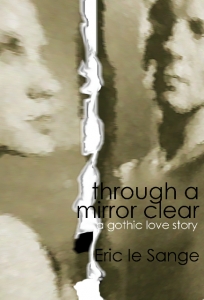 So, you see, creating a book can be extended by new technologies and the author can have an even greater sense of omnipotence over his or her world!
www.azimuthtrilogy.com
The Strange Attractor by Eric le Sange Kindle, Amazon
Through a Mirror Clear: a Gothic Romance