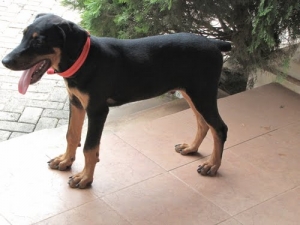 We keep two or three dogs in the compound here in Accra. They run freely, are well behaved and well trained. Everything they do (in the main) is in the best possible doggie taste. But, as you may remember from a recent blog, two died, leaving old Heracles, a grey muzzled Alsatian cross. He is such a genteel fellow and did not, in any way, mourn the loss of his companions of ten years or more. This is because he was third in line to the canine throne. Now he was top dog with no usurpers in sight. Life could not get any better, could it?

Then, yesterday, we bought a Doberman pup, aged four months, the reason being that you should always have at least two dogs here; one running and one in a (spacious) doghouse, at night. Robbers in Ghana throw poisoned meat over the wall to eradicate the threat of four legged guards. In a couple of months or so we will take ownership of another pup, this time a white Alsatian. Anyway, back to old Heracles and the insurgency. Already, the old dog is teaching the young new tricks. The little one follows the big one round the garden, like an imprinted duckling. And the old one enjoys showing him around. “This is a nice place to pee, this is where my dead friends are buried, this is the swimming pool, here’s where you eat, this is Master, don’t dig up plants or you will be in trouble, I can tell you, this is Mistress etc etc.

In the way of cartoons, Sirius has taken to living here immediately. He did not bark all night but tucked himself up in his shed with Heracles lying on the other side of the wire. In the first day he did the following: he fell into the pool and was rescued standing on his hind legs at the shallow end, his paws on the edge, crying lustily. He walked into windows (the first experience of glass in his life). He bounced off mosquito netting doors for much the same reason. He sat (firmly pressed!) next to Heracles as they got their coconut halves to gouge out – good for the teeth – and took it to eat on the grass next to his sudden big friend). He barked at planes which flew too low and at passing irritations such as boys with bells on little mobile food bicycles. He appears indomitable and eminently ready to be trained in all matters of house protection. As we figured, the greying Heracles is his teacher, friend and playpal.

It brings to mind the whole business of culture. What we are all born into (whether it be as dog, plant or human) helps to define our growth and behaviour in the world. Much of our learning is at a level below the conscious. How else do we come to feel love, loyalty, fairness, protectiveness…? We like exactly the right proportion of external control and freedom of choice (which varies with the individual!).

We, in the house, are not cursed by too much sentimentality. Dogs are dogs and not humans. They have their place in the pecking order and must be shown it. But a dog’s life doesn’t seem that bad – or that different from our own, give or take the odd bone!