Minor Keys No.9
Late on in the first book, the Magus, now beginning to really question his role as a warrior who kills, sets out a strategy to encourage villagers to protect themselves. He teaches the art of bow making and offers a reward to the best bow-maker;
-Who made this? No-one stepped forward, –I repeat, who made this? It has a balance that sets it apart. A girl, new to womanhood, stepped forward. Some men allowed their indignation to show.
-I did not speak at first for I thought you were about to mock me.
He smiled at her, -It has a special quality. He took an arrow and notched it. When he released it, it flew over the heads of the circle of watchers and embedded itself in the centre of a tree. He spoke loudly, -She found wood such as we brought back for drying. She has cut it well so that the balance graces the hand. It is small but carries the power of many a larger weapon. He gave it back to her and offered her one of his arrows. She aimed at the same tree and the missile struck it just below his own. There was a shout of approval from the villagers so that her face reddened.
-You have a choice of reward, he said, –I have face colourings from alchemists far away in the east or a bow maker’s knife, crafted by metal workers in the City in the Mountain.
-I will take the knife! 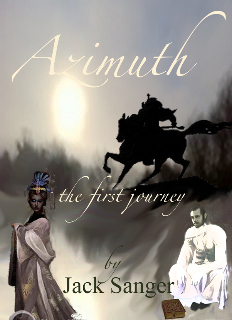 There are many instances in the Azimuth trilogy where women’s roles are questioned and plenty where women’s traditional roles are reversed. It is one of the pleasures of writing that you can question current mores and, being a management consultant for so long, in this case explore the ‘glass ceiling’ preventing women’s advancement in allegorical forms. The Magus has now developed a consciousness where he sees no difference in the capabilities of men and women in many arenas and insists upon their equality therein. As you can see, a warrior female from a peasant background creates cognitive dissonance among her male peers.
So why was she so different? And what happened to her after the Magus left the village? I suspect the following is true. She was secretive and somewhat androgynous, if not in physical attributes, at least in her psychology. From a child she harboured both female and male aspirations. She wanted to be a mother but she did not want the skivvy drudgery of being the marital slave of a village man. She did not like the boys, nor the men around her, including her father whom she had to avoid because of his prying eyes and obvious intent. She would take herself off into the fields and practise physical movements which, she imagined, would serve her well in battle. She stole a knife from a boy bully and learned to throw it with accuracy despite it being not constructed for this purpose. A little while before the Magus came to save the village from mercenary soldiers her father trapped her in her bed. In an instant her knife was at his throat, making a neat superficial incision. She enjoyed his jabbering apologies as he fell off her and then stumbled out into the darkness. Her mother scolded her saying that a daughter was her father’s first to take and her husband’s second, everyone knew that.
As happened to many who were affected by the Magus’ calm, unemotional convictions about respect and harmony, she resolved to leave the village and seek her future elsewhere. Her story had a happy ending unlike so many recounted in these ‘extra pages’ of Azimuth. She came across a merchant who travelled with a small band of guards to bring chinaware from the south in exchange for northern mountain wool. Her female nature meant that she could dress as his wife and enter the halls of the rich where his armed guards could not accompany him. On the occasion that would have brought his death, her knife throwing saved his life. His smouldering interest in her blew up into a raging flame and he pleaded with her to become his third wife. She agreed and became his favourite from that day on. She taught her children, three girls, the arts of knife and bow and then her grandchildren.
www.azimuthtrilogy.com
(Azimuth by Jack Sanger also in Kindle books at Amazon)
All works by this author at www.chronometerpublications.me