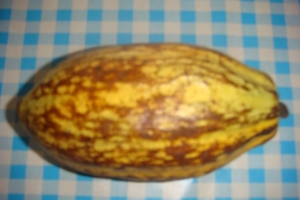 When I wrote the title for this piece, it occurred to me that most of my readership (which is truly multi-national) would not understand its nuances. The phrase I should cocoa means that you are not going to do something, whatever someone has asked of you (see the following explanation).

It is rhyming slang and originally stood for “I should say so!”, a sarcastic exclamation to express disbelief, derision, scorn or indignant negation. You might also render it as ““You must be joking!” “Not on your life!” or “No way!” http://www.worldwidewords.org/qa/qa-ish1.htm

Anyway, after this long-winded beginning, I used the title to refer to one of those events that occur rather rarely except when you are in a new country (Ghana, here). The title is ironic because I feel, having encountered it, that everyone should cocoa!

A member of staff gave me a present the other day. In a plastic bag I found three alien objects. I knew that they were fruit of some description but had not seen them before. He said they were cocoa pods and I should scoop out and eat the contents.

This I have done and the results are astonishing, appealing to all the senses. Inside the brown-speckled yellow rugby ball shaped exterior are cocoa beans the size of thumbnails, each packed in a sweet, sticky white glutinous film. The beans are bitter. They lie inside as if they are extras from that fifties film, They Came From Outer Space. I looked them up and discovered that these raw beans contain a myriad of essentials for a healthy body and are the number one killer of free radicals. They also increase brain power which may explain my earlier long-windedness – more words per second, unfortunately! They are the greatest superfood on the planet.

Meanwhile, the Pope is visiting secular Great Britain in a multi-million pound beano, paid for by the tax payer. They are paying their agnostic taxes and he will go there and try to convert them. He will travel around in the usual papal bubble. After the Vatican’s failure to make available its files on child abuse across Europe, I think he will be a little like a bean in the pod in my photo. Sweet on the outside and leaving a bitter taste in the mouth. But in his case, there are no health benefits.

NB If the Pope’s visit turns you to smoking, eat very dark chocolate – the cocoa in it redresses some of the worst effects of tobacco. Then shout “I should cocoa”