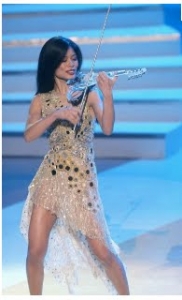 You too can be a great musician

Both of my sons are musicians. One plays and creates using a number of instruments some of which he makes and the other composes using electronics. The older started with piano and the younger with guitar. They went to teachers, off and on until their teens. Somehow both managed to cross that divide into which the vast majority fall and never climb back up. I don’t really remember dragooning them into practice. I have heard a number of grown-ups say that they wished their parents had ‘forced’ them to continue so that now they might have a degree of musicianship, enough to entertain themselves and friends.

Vanessa Mae was compelled to practise by a very forceful mother (“I love you but it is conditional on you playing”) and now, at 30, she is beautiful and wonderfully accomplished at her violin. A sexy soloist. I say that because, in the documentary I saw yesterday there was film of her from 15 upwards in hot pants, bikinis and figure hugging dresses. Her mother made her iconic. Classical prodigy as pubescent pin up. She has not spoken to her mother in eight years….

Vanessa was asking herself a question: how much is my mastery owing to hard work and how much to some innate quality? Nurture or nature. She would have preferred the latter to have dominated. She didn’t want to give too much kudos to her mother. She went to experts in this and that who scanned her brain, tested her bravery, explored her extroversion and sought to discover how true was her ‘ear’ for sound. At the end the jury was half in and half out. You have to have aptitude but then most of us actually have. Then you have to practise for between 5,000 and 10,000 hours by the time you are adolescent to become a soloist. The brain is shaped by all this until you only need to exercise the desire and you perform.

I am glad we managed to encourage my sons to play. It is a huge part of their lives today. I have always thought they had aptitude, something lacking in myself. I can strum some chords and sing some songs but nothing like them. Now I realise I could have done it, too. But my parents did not think of it. And if they had forced me, my relationship with my father would have zeroed like Vanessa and her mother.

It all does prove something and that is that whatever we want to become is merely an exercise in willpower. You just have to want it enough to practise for 10,000 hours.