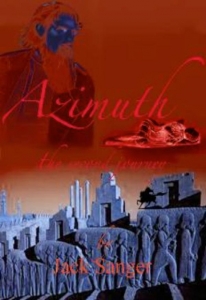 -True, she murmured thoughtfully, -I think that in the terrible congress of her rape some divine force softened the brutish breeching of her body by doctoring the man’s seed. It must have been so. Magic of the good kind. Which brings me, she lowered her voice as though the walls might be listening, -To the quest I have for you old historian. Kamil’s head sank in response and he moved imperceptibly towards her, interlacing his fingers on his lap. He expected the worst but to his surprise he was also aware of something stirring in his stomach that seemed to be akin to excitement.

Thank you for downloading Azimuth Book 2: The Second Journey, I hope that you enjoy reading it – all I ask you in return is to leave a review when you’ve finished it. Many thanks, Jack.

Book Two: The Second Journey, has 22 more tales, headed by the same sequence of Tarot cards. This is the middle stage of the Magus’ life and encompasses what he became famed for. He is more of a sage, has crystallized some of his thinking about the nature of existence but is faced by the likelihood of a terrible war which will lay waste to the populations of east and west. His journey to resolve this awful, impending conflict is again broken into separate adventures, linked and then fused as the book reaches its tense conclusion. All the while the Tarot cards display more and more influence on events both within the tales and outside them. And Kamil’s readings of the tales help to influence Sabiya’s desperate fight to save her prospective empire.
As in Book One, Kamil’s life and power within the court slowly grows. Princess Sabiya is now a young woman. She is to become empress one day and is much sought after. There arrives in the court a strange, malevolent Rasputin of a creature called The Red Man who seems bent on the court’s destruction, as well as sullying Sabiya’s physical and emotional world. Kamil may be her only defence against the man’s hypnotic, rapacious powers. All the while, Kamil’s own life undergoes change, much of it orchestrated by Sabiya, herself, who has taken an interest in changing him from a ‘dry old historian’ into a social, attractive man of the court.