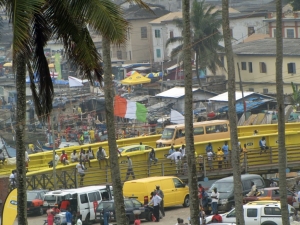 Vodafone: polluters of an African heritage

Here I am in France, with space for reflection after a rather hectic time of it. I am at an age when, gradually, assumptions are made that with the passing years the vital edge of analytical thought decreases and the demand for my labour consequently diminishes. I finished my ten year stint with the British Board of Film Classification a week or so ago as a member of their children’s advisory panel, though that was the end of a natural span of service but I also found that management consultancy in the public sector had been excised by the latest Tory edict. Before that sounds too crabby and personal, it suits me. I have to complete the final volume of a three stage fictional account of the beginning of agnostic thought among the demons and gods of a time pre-Buddha, a cross between Rider Haggard, A Thousand and One Nights and Samurai legends. In other words attending to a personal sense of legacy.

But the blogs will also continue because they are part of a discipline. They maintain the focus on everything from social change to agnosticism in the same way the vicar compiles his sermons for a Sunday. They also put out into the ether certain questions and challenges which others might take up. Tiny snowballs that accumulate into landslides, if the time is right.

Of course, snowballs are beyond most Ghanaians ken. In that tropical clime it is possible to witness hailstones from vast cumuli disturbances overhead, where rain drops are shuttled up and down in the deep miles of cloud, icing, dropping, rising and dropping so many times until, too heavy, they crash upon the world beneath. But snow, no.

What most Ghanaians seem oblivious of, also, is the insidious way that mobile phone companies are destroying any aesthetic that might exist within traditional communities. Few people have landlines. Vodafone have recently bought Ghana’s main telephone system and are joining the forces of pollution that are turning some of the historical sites of Ghana into vast advertising hoardings. How it is done I have no idea. Equally, how it can be stopped is also beyond me. Whether money is exchanged for officials to turn a blind eye or whether the eyes are blind at the outset and do not see the increasing travesty, I don’t know.

Just imagine this. You live in a pretty Cotswold town in the Uk or in the Lake District or any medieval town in Europe and along comes a telephone company and paints the main building on a confluence of roads at its very centre, red. Or yellow. Or purple. Then, to add the icing they put lots of Vodaphone, MTN, Zain or other branding insignias all over it. This is what is happening in Ghana.

I look out on my unspoilt village in France and reflect on Cape Coast along the sea road from Accra. To help you empathise with my troubled thoughts, you can see in the accompanying photograph the main bridge in its centre, now a crude yellow vehicle of advertising for MTN. Vodafone are rapidly catching up. They want to paint every town red. Ironically, the photograph was taken from the slave fort, built when the British, Dutch and Portuguese thought in equally demeaning terms about the Ghanaian people.

Could you argue that if the people don’t object, then it can’t be bad? Like Avon selling skin bleaches to African women. Or tobacco companies turning their financial strategies towards poor countries where peoples have to be conditioned into the consumption of cancer-inducing cigarettes?