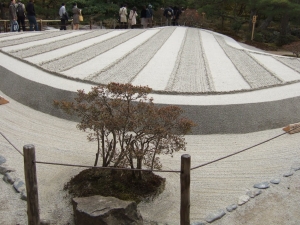 Having left behind the extraordinary silent harmony of nature and nurture (see photograph) around the Buddhist temples of Kyoto and Hiroshima, I am back in Ghana where the chaos of the roads, electric sounds and utilities prevails, as always. If you asked me how I’d like to spend my last few hours of this life, it would be in a Zen garden. There is something exquisite, a deep personal response from one’s essence when viewing sand sculptures which seem to preserve every grain in place, or individual plants, bushes and trees that are accorded place and reverence in the spread of foliage and earth. Very different from UK gardening programmes which, even in the most planned of country estates, use such hyperboles as ‘rich’, ‘riotous’ , ‘pageant’ and portray the garden as a site for drowning, a multi-sensory paradise. Well, Buddhists haven’t the same symbolism and paradise doesn’t come into it. It is not a form of drowning either but rather an uninterrupted meditation. Its effects permeate Japanese society where interiors are spare, where the meal table is aesthetically pleasing, where flowers are arranged in vases, according to a centuries-developed art, where targets shoot arrows in a Zen stillness and where cherry blossom has a spiritual symbolism that drives the entire population to picnic under the falling petals.

Well, so it seems to me on my brief visits there. It may all be superficial and I am taken in like a gullible tourist. Then again, when one is willingly taken in and the experience bolsters a basic drive to find meaning in life, then it can be almost ecstatic in its effect.

Surface and depth were paraded on BBC World News this morning. First, the sun has dimmed. It is not known whether this is similar to the 70 year dimming that led to a mini ice age a couple of centuries ago but its surface has turned turbulence-free. The second story concerned three piglets that are sharing the good life in a pen with a tiger. They have been clothed in stripy jackets so that the tiger’s natural predisposition for a pork lunch is counteracted by its desire to look after its own kin.

Western-philosophically speaking, from Plato on, human beings have pondered on the degree to which life is an illusion. Phenomenologists have sought to train the mind to empathise with the reality of living things, inanimate material and of others’existence. But most philosophy agrees that we can know the act of knowing but never the object of that knowing. Maya in Hindu belief.

Zen gardens, by their attention to the essence of things, make you aware of the illusion of living; the pork under the tiger skin or the leopard sun that can change its spots.